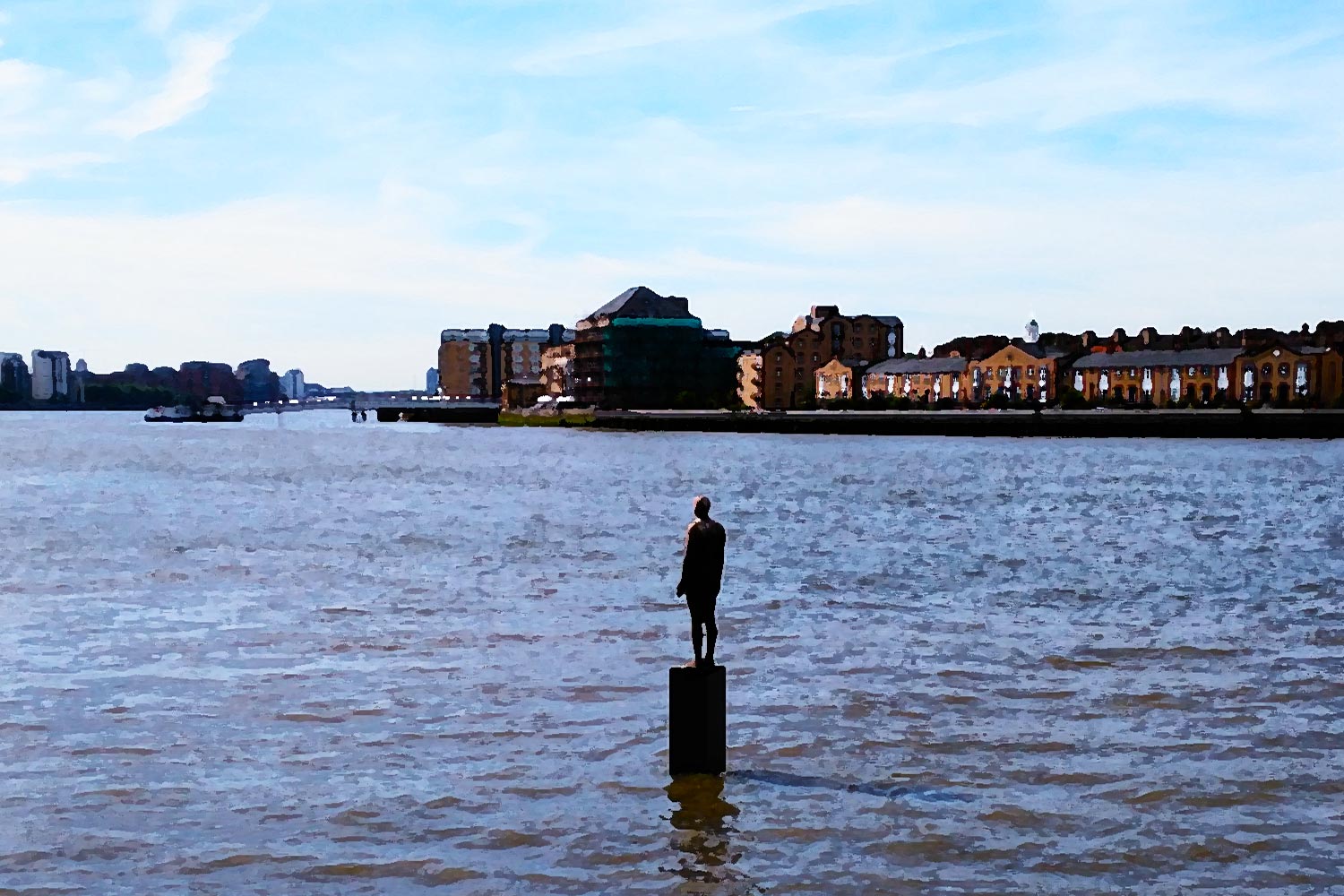 And then you’re admonished to start taking life seriously. Mostly because that’s what’s expected of you in this day and age.

But things change – life is protean on a macro scale, sometimes even on a micro. You remind yourself to be adaptable as a means of survival – survival of the fittest. And then you’re told to master the art of compromise. To be content with having less, being less – acquiring that much desired zero footprint of ethereal existence. Because we should all contribute to changing this much abused earth for the better.

You’re hastily advised that all of the above applies only to the select few who seem to have some bizarre notion of universal consciousness implanted in their brains. The rest can roam the earth with squandering abandon and still maintain a firm claw-like grip on every single aspect of your life. Are you feeling trapped yet?

A pause for thought – or maybe not as the case might be.

Looking at a map that helpfully points out “YOU ARE HERE” – whatever this here is. Do we look for the street, the borough, the city, the country? No? Maybe the continent or this suffering planet could be our reference point – for now.

For now: You are here. It’s August 18th 2018 and you are here. There’s an emphatic arrow pinpointing your current location, but somehow, you’re still confused. Which exit? Which way to Moorfields Eye Hospital? Old Street tube station is not nearly as perplexing as other tube stations in their spiderweb-like exit design. There’s always a pattern: sometimes it’s a nefarious conspiracy of signs that appear to lead nowhere and at other times, as straightforward as the Star of Bethlehem shining upon you on your way home – maybe deceptively so.

Take the exit on your left, past the pungent smell of urine sticking to your nostrils for dear life. Find relief in those small reminders of mortality, the putrid smell of rejection that allows us to keep going is something to be cherished. A man dressed in unhospitable rags asks for a pound which you don’t have handy, but will no doubt part with on your way back. Right up the busy stairs where you will be mindlessly pinballed into and given the typically English civility of “sorry”, then left to drift – you must slowly but surely trail the green painted line to the hospital.

This is it… Where vision is of paramount importance yet so little of it is to be restored. Undoubtedly, it is often rectified with an assortment of ointments, drops, antibiotics, lenses, scalpels, you name it – they have it all. We have it all. Glasses to rectify your ailing sight, and sometimes even miraculous surgeries to give the gift of sight to the blind – until they realise they were much better off without. Because why would you want to be looking at eyesores when you could be visualising perfection?

Maybe I should at some point tell you how it all came about. How this gift of sight went wrong. It was never there in its entirety to begin with and forcing it with flashing lights that resembled a sky full of pulsating stars, endless hours of eyepatched dread and eye exercises didn’t help much either. At least one costly operation later fixed the pronounced squint so I was safe from one more reason to wallow in self-pity. Strabismus is no small matter in the schoolyard, I must admit. Given the circumstances, I haven’t done too badly, even if I say so myself. The one-eyed man [sic] is king to all the blind and possibly even to those who should be able to see, but markedly fail to do so with punitive intent. I could not see the butterfly well, but felt the soft flapping of its wings by my ear.  I might even have heard it, had I listened hard enough, who knows. It was the joy of its existence that piqued my interest and propelled me to follow in its elegant dance. When you are blessed with less you tend to notice more, although that’s not always the case.

“Good afternoon sir, have you visited Moorfileds before?”, asked the well-meaning yet slightly jaded receptionist handing me a form to fill in. “Good afternoon”, I stammered “Yes, about two years ago when a friend poked me in the eye”. A bridge of arched eyebrows formed supported by mildly impressed blue eyes. “It happens”… But, how often, I wondered and maybe said it out loud as the receptionist raised his head in polite quandary.

“Please, take a seat, I’ll fill in the details and call you as soon as it’s all done.”

“Thank you, much appreciated” – sometimes it pays to acknowledge services rendered. We take so much for granted. At least it pays in wilting smiles. Five minutes later, the dreaded question of identity comes up as I’m called to the desk to verify my existence. Clinic letters come in handy, and thankfully, people are often too embarrassed or uninformed to ask for further details. Take a deep breath because you’re going to need it.

“Is this you? The details I seem to have are for another patient, by the looks of it”

“Yes, this is me” I replied, swiftly handing over a letter written by my clinician to verify my seemingly complicated identity. The receptionist took his time to read thoroughly with a pointed exclamation at the end.

“No problem sir, I’ll amend our records to reflect the current details”

“Thank you. Really appreciate it”.

Reclaimed my seat in the waiting room and was called to triage shortly after. At this point, lights were piercing my eyes and it was getting more and more difficult to discern clear shapes. It wasn’t a blur as much as it was mist in my eyes, prompting me to rub them in an effort to regain some clarity. To what end? That’s what I was there for: clarity, or lack thereof.

The nurse was reassuringly accommodating, asking all the right questions and jotting down in some inscrutable shorthand what appeared to be the story of my eyes. A brief examination showed that more tests are required, seeing as reading the alphabet was not entirely a walk in the park. It was blurry-vision eyedrops time once more… That was all in room one.

Room two had further treasures: I was asked all about my medical history and current medication and another attempt was made at alphabet reading. Maybe I’m illiterate, maybe it’s Maybelline, maybe it’s all Greek to me in one hazy sense but it was impossible. I still had one good eye – or did I? No, by the second nurse’s notes, it appeared that I was in for the long haul. More eyedrops – please be seated,  you will be called – but it was all now coming together in a blend of subdued colours, making it hard to find a seat. I was seated alright, for a good two hours, unable to see, I was seated waiting patiently to be examined by the best in the field, hopefully.

There’s a beautiful ring to hearing your name and not hesitating to get up. The waiting room was full of people whose vision was possibly compromised far more than mine. After all, everything is temporary – until it’s not.  Yet, hearing my name gave me the resolve I needed to get up and get on with it. It’s been a long journey and to mark it with a name is the fitting thing to do. So I stumble up and walk in the general direction of the person calling. Room three was painful concentrated beams of light in quick succession, follow the pen to the outer limits and beyond, if possible, as involuntary tears stream down my cheeks. More eyedrops required – they cannot see what’s wrong, it’s too blurry (you’re on to something there Sherlock!). A couple more hours and many drops later, I was told I’d need to have an injection in my eye to clear the area.

Well, let’s just say that the idea of having something sharp stuck in my eye was not entirely appealing. But it could potentially be worse. So, let’s get on with it. It was already late and it took every ounce of courage I had to keep my eyes open as the needle inched closer to the target. No and no… third time’s a charm – eyes wide open and a syringe gracefully lingering – what would happen if I looked around now? Would my eye be permanently damaged by my own lack of discipline? Let’s not test that theory now. It would be counter intuitive perhaps. A sigh of relief when the needle was extracted was all I had to offer the kind doctor who remained well after her shift had ended to make sure I get all the medication required and get on the tube safely. Made a note of her name to write a letter of thanks, whatever the results. Faith in humanity partly restored.

As days go, it was a full one. And a full moon, perhaps, if we could see it through the thick cloud of somnolescent London, its tired limbs resting fretfully under misty neon signs and streets sunk in a semi-permanent zombie apocalypse movie backdrop state. We hear you London, you will not bend to the will of the uninformed populace, but neither will we. The world is your Oyster card – you can pay-as-you-go to experience the glory of cattle stacked carriages well beyond capacity in disgruntled grunts and rolling eyes, pretend-sleeping with headphones on to ensure no one will try to encroach on your territory – after all you fought for it, and you fought hard.